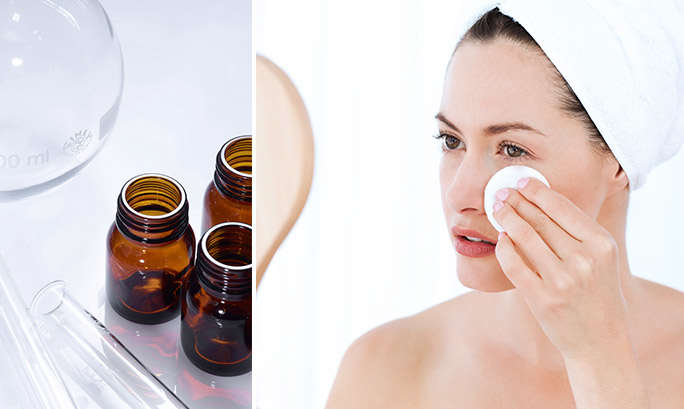 THE ONE THAT GIVES YOU GLOW
Vitamin C (ascorbic acid) is a potent antioxidant that protects skin from free-radical damage caused by environmental aggressors like sun damage and pollution. As a consequence, it’s an effective anti-ageing treatment – particularly as it boosts collagen production and helps repair tissue too. It also inhibits the production of tyrosiniase (the enzyme found in skin cells that produces melanin), which is why its an effective brightening ingredient and often used to treat hyperpigmentation. Not bad for one vitamin, right?


THE ONE THAT ANTI-AGES
You’ll probably find Vitamin A in your anti-ageing products under the guise of retinol.

This powerful antioxidant is a cell-communicating ingredient, which means it attaches to skin cells and and makes them behave like younger skin cells. Think of it as a battle: retinol vs free-radical. While free-radicals cause skin cells to behave older, Vitamin A tells the same cells to behave younger. The result? Smoother skin. There’s only one downside: if your skin is easily irritated you may need to introduce it gradually.

THE ONE THAT REPAIRS
Vitamin E (Tocopherol) is an antioxidant that reduces the risk of free-radical damage, particularly caused by sunlight. This is because it absorbs the energy from UV rays, targeting the harmful effects of it, such as fine lines and wrinkles. Aside from anti-ageing properties, it also strengthens the skin’s moisture barrier and acts as an anti-inflammatory making it an effective treatment for problems like sunburn or scarring.


THE ONE FOR REDNESS
Vitamin B3 (niacin or niacinamide) boosts the production of ceramides (the “glue” that binds surface skin cells together). This process strengthens the skin’s barrier function, keeping “good” moisture in, and “bad” irritants out. This shield-like behaviour makes it an effective anti-ager. But Vitamin B3 also has anti-inflammatory properties, which is why it’s often used to treat acne. And because it has cell-communicating properties that tells cells to produce more collagen, it’s also effective at treating the red marks left behind by breakouts.

5 Dos and Don’ts for Better Health

How Stress Affects Your Skin

Why You Should Care About Exfoliating